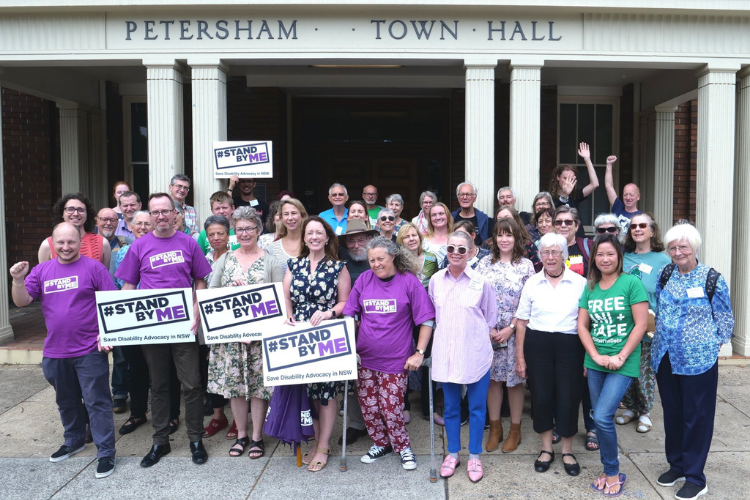 After months and months of stalling, today Abigail asked again why the NSW Government had failed to commit to long-term, secure funding for independent disability advocacy services despite the recommendation from the Ageing & Disability Commissioner for NSW.

Ms ABIGAIL BOYD (12:38:10): My question without notice is directed to the Minister for Education and Early Childhood Learning, representing the Minister for Families, Communities and Disability Services. The much‑awaited reported from the Ageing and Disability Commissioner into disability advocacy was delivered six months ago but the Government has still not indicated whether it will accept the commissioner's recommendation to provide secure long‑term funding to the independent disability advocacy sector. Is the Government expecting that those organisations will have to wait until the budget in November or December of this year to learn whether they will have funding past the end of year, by which time, with only around four weeks of funding left, they will already have had to end leases and lay off staff?

The Hon. SARAH MITCHELL (Minister for Education and Early Childhood Learning) (12:39:04): I thank Ms Abigail Boyd for her question, which she asked of me in my capacity representing Minister Ward. On behalf of the Minister, I have some advice for her. She would be aware, and no doubt other members of the House would be aware, that New South Wales was the first State to sign up to the NDIS. It was an historic moment for our State as we put people with disabilities at the heart of the system, giving them choice and control over the future. We know that many people with disabilities require advocacy, and that comes in many forms: their family, their friends and the outstanding advocates who deeply care for people who often have very complex needs.

The Government does not want people falling through the cracks. That is why we established the Ageing and Disability Commissioner to guard against the abuse, neglect or exploitation of people with disabilities. With respect to advocacy funding, I can advise the House that there has never been more funding available for disability advocacy services. The Government recognises the important role of advocacy organisations in ensuring that all people with disability have the opportunity to access independent support and information, regardless of whether they qualify for the NDIS or not. Funding for information and advocacy services may be provided through NDIS participants' plans or through NDIS Information, Linkages and Capacity Building [ILC] funding. ILC funding is all about making the scheme sustainable by providing supports that keep people out of the system. People who are not NDIS participants can also receive access to advocacy services through the ILC.

In relation to the member's question, I can say that the House is aware that the Ageing and Disability Commissioner's report on disability advocacy funding was delivered to both Houses of Parliament on 19 December. At that time, in order to provide funding certainty to advocacy services, the Minister for Families, Communities and Disability Services announced an extension to the Transitional Advocacy Funding Supplement through to the end of this year, as the member referenced in her question. The Minister has met with advocacy groups and explained that the Government is working through the recommendations and will provide a response in the near future. To inform New South Wales decision making and contribute to the national review, the commissioner was tasked with reporting to Parliament on funding arrangements for independent specialist advocacy. The commissioner's report recognises the need for a contemporary and sustainable disability advocacy system and a move away from the "cottage" industry to one that is streamlined and focused on individual and systemic advocacy.

The PRESIDENT: I do not have a copy of the question. I remind members that it helps if I am provided with a copy of questions after they are asked. I believe the Minister was being directly relevant to parts of the question.

The Hon. SARAH MITCHELL: I inform Ms Abigail Boyd that the Government is currently working through the 11 recommendations in the commissioner's report and funding will be considered as part of the budget process.

Ms ABIGAIL BOYD (12:42:35): I ask a supplementary question. I ask for elucidation of whether the answer means that those organisations will have to wait until November to work out if they will need to have already closed their doors by December.

The Hon. SARAH MITCHELL (Minister for Education and Early Childhood Learning) (12:42:54): While I appreciate the assistance from those opposite, I say to Ms Abigail Boyd that this is the information I have been provided. I will take her supplementary question on notice and come back to her.

Ms ABIGAIL BOYD (13:11:45): I take note of the answer by the Deputy Leader of the Government in this House to my question in relation to independent disability advocacy funding. We have talked about funding for independent disability advocacy organisations since the beginning of this session of Parliament. I would like to remind members of some of the discussions we have had about this issue. On 6 June, when we were discussing the Ageing and Disability Commissioner Bill, The Greens moved an amendment to ensure that these organisations received their funding and the Hon. Damien Tudehope responded:

Members can imagine my disappointment when, having tipped off the Minister that I was going to ask a question on disability advocacy services today, I received a minute or so on the NDIS, which is clearly irrelevant. On 18 June, in relation to the same bill, the Hon. Matthew Mason-Cox said:

It is incumbent upon this Government to deal with that uncertainty to provide those organisations with a clear picture of the future. … It is important that they understand that they will not be left high and dry and that their services will be appropriately funded to ensure that disabled people can access those services when they need them..

Yet here we are with the same organisations being forced again to negotiate leases and lay off staff knowing that they only have funding until December. On the same date the Hon. Damien Tudehope said:

In terms of the assurances that members are seeking that disability advocacy groups continue to be funded, the Government gives a commitment. … I urge members …[to] await the outcome of the Minister's consultation with the disability groups to identify the gaps so that all services are properly funded.

I must say that perhaps Abigail Boyd is a few months early in moving this motion.

This was said because we were waiting for the recommendations of the Disability and Ageing Commissioner, which we now have and those recommendations support this motion. The Hon. Matthew Mason‑Cox said:

I think we can take great confidence from the Minister's public comments that he will move quickly to deal with any issues that arise, and to settle the funding and ensure that there is certainty as soon as possible. We need to accept his word in that regard. … The new Minister has the utmost good will to resolve the matter as quickly as possible. Let us give him the opportunity. … Hopefully the issue can be resolved as soon as possible and there will not be any unintended consequences for organisations that rely on this funding.