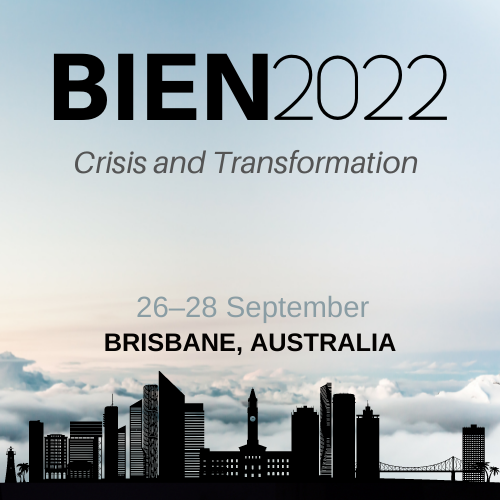 Demanding nothing less than utopia: how we win a universal basic income

Abigail spoke on a number of panels, including the opening plenary panel, of the annual Congress of the Basic Income Earth Network, the foremost international academic body concerned with basic income.

BIEN Congress 2022 was held this year in Brisbane after two years online.

One of Abigail's opening speeches can be read below.

Demanding nothing less than utopia: how we win a universal basic income

The ongoing climate and Covid crises have shown more clearly than ever that our current economic system is not fit for purpose. In response, our governments have bent what were previously assumed to be the rigid rules of running a capitalist society – abandoning the deficit myth, handing out billions in income support – and more people than ever before have begun to question our economic status quo.

There has never been a better time to push for a new way of doing things, to introduce new ideas, to fight for long-overdue improvements to our economic system. But the fact is that no-one’s going to listen unless we embed those ideas within a compelling context. Tinkering around the edges isn’t going to bring enough people with us – we need to paint a compelling picture of an alternative future, a future worth fighting for.

Achieving a universal basic income will take nothing less than convincing the majority of the voting public that utopia is not only possible but essential for our survival.

And that is why, in the midst of the first Sydney lockdown in 2020, my team and I spent weeks developing our own version of a universal basic income. We call it the Universal Wellbeing Payment and, as far as I’m aware, we are, not only the first Australian political office to actively campaign for a universal basic income, but the first to put forward a concrete and detailed proposal for what an achievable, effective and transformative UBI could look like.

Because if we are to achieve a universal basic income in this country, we need to be able to picture the difference it would make to our lives – not a 2D picture, but a 3D picture with enough detail so that you can walk inside, take a look around and imagine what your life would look like if we were to implement a UBI.

So our plan for a Universal Wellbeing Payment is very detailed. You can go to universalwellbeingpayment.com.au for full details, to sign up to the campaign, to leave feedback. But whatever you do, don’t tell me that it’s fanciful. You need to believe in utopia to have utopia.

There will be those at the ready with their reasons why this proposal can’t fit into the current economic status quo, but that is the whole point – done right, a universal basic income is the foundation of a different type of economy. A modern economy fit for the 21st century, one that is designed to first and foremost provide for every person’s basic needs, guaranteeing a minimum standard of wellbeing for all, before anyone else gets to skim the surplus.

The UWP starts with the basic premise that everyone in a country as rich as Australia – or in a state as rich as NSW – has the right to a certain level of wellbeing. A right that is distinct from the right to engage in meaningful work.

A Universal Wellbeing Payment recognises that we all contribute in different ways. Whether you’re a carer, an artist, a student, an entrepreneur – you can get on with what you need to do, knowing that you will be supported regardless of your income.

Our ability to find paid work is not synonymous with our value as individuals – our right to wellbeing is separate and distinct from our right to work.

This is not a proposal that should be seen as in conflict with a proposal for a Jobs Guarantee – in fact, a jobs guarantee sitting on top of the Universal Wellbeing Payment would cure some of the problems a jobs guarantee might otherwise have (although unfortunately I don’t have time to go into that right now!).

The language we use can of course either reinforce mainstream economic thinking or it can turn it on its head. And this is critical to why we called our version of a UBI a Universal Wellbeing Payment.

Yes, in many cases the amount would be effectively taxed back when in the hands of the wealthy – our website contains detail about how that works – but by making it universal, the UWP ensures people’s autonomy, which is so vital for mental health, while also ensuring that the stigma involved with being on so-called welfare is done away with. It’s no-one else’s business whether you are reliant on the UWP at any particular time.

Because no one should have to beg the government for the support they need in tough times. We shouldn’t be forced to wait, to jump through hoops to meet conditions, or to repeatedly justify our circumstances to CentreLink. Imagine how much easier people would have found it during the pandemic if they already had Universal Wellbeing Payments coming in, instead of having to wait to be noticed by the government as they fall through the gaps in our welfare system. (And let me flag here our Greens initiative for a public bank to facilitate these payments - which you can see at publicbankingnsw.com.au!)

There is nothing basic about the Universal Wellbeing Payment. This is not an amount to ensure that you just survive, it is an amount to ensure that you thrive. It’s not an amount that still forces you to take on paid work before you can do more than just get by from day to day. It’s an amount that recognises the contributions that we all make to our society, that recognises the right of all of us to a minimum standard of wellbeing, regardless of whether or not we also have paid work.

And the UWP is a payment. It’s not income – it’s not something you have to do something for. It is an amount you’re owed simply for being a participant in our society. To spend however you like. And it’s paid in addition to any support you currently receive for your additional needs or special circumstances – ensuring that people with a disability, parents, carers and other groups will continue to receive more in recognition of their additional expenses.

Importantly, the design of the UWP ensures that governments aren’t let off the hook for providing essential public services – like education, health and public transport. The rate of payment will be independently reviewed and adjusted depending on cost-of-living pressures, taking into account for example the increasing cost of essential services in circumstances where governments are backing out of their obligations to provide them.

Ideally, the Universal Wellbeing Payment would be implemented nationwide, but it can be implemented at a state level with the co-operation of federal agencies. And that’s important. If our federal government won’t lift people out of poverty, our state and territory governments still have the responsibility and the means to do so. And when the stakes are so high, there should be nothing stopping us going our own way, building momentum for a UBI at local level and moving up levels of government, from state to federal, if that’s what we need to do.

We can’t tinker around the edges anymore, treading politely so as not to get criticised for being unrealistic, for failing to recognise the power imbalances that are preventing the many from wresting power off the few. The challenges we face are gigantic – climate, inequality, health – and our economic system is standing in the way of us tackling them in any meaningful way. We cannot accept anything less than a complete overhaul of our economic status quo. Getting that will require us to inspire far more people to join us in our fight for change – we must be unapologetic in demanding nothing less than utopia.